Clothes are one of the basic necessities in human life. We need clothes not only to keep up socially, but also to protect us from the extreme weather conditions. But have you ever wonder what goes behind in the process of making clothes? How come a raw material turns into a fabric and then into a clothing piece? It is where two of the prominent types of loom i.e. Handloom and Powerloom come handy. As it is because of them that any cloth piece is weaved into a beautiful Saree, Salwar-Kameez, Dresses, etc. If compared, both of the looms have their own pros and cons. But which one excels in creating quality clothing? Let’s discuss. 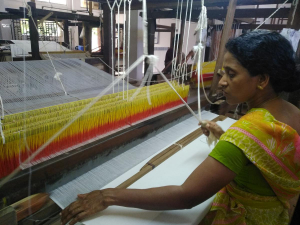 Handloom is a wooden weaving frame that is operated manually, without the use of electricity, to weave fabric. This tool is used by the handicraftsmen to furnish different types of fabrics. Handlooms come in different types like the traditional ones used by the tribal people and a modernized version which is used to weave different styles of weaving. There is a huge demand of the handloom weavers since 19th century since a few forms of weaving can only be done by these special craftsmen. Every fibre has a different kind of handloom, using which the fabric is further transformed into the final product. There are also handlooms with jacquards that are used to do stylish weaving. 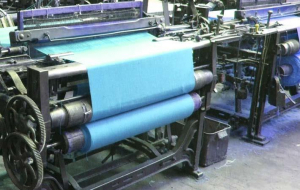 A power loom is driven by electricity and is also used to weave clothes. It is mechanical and nature and need not any manual labour. It’s in 1850’s that power loom industry became popular since there was a rise in the demand of cotton but no other means to produce it. Since power looms are mechanically powered, they were preferred over handloom since they work 10 times quickly and efficiently which leads to bulk production. But one of the drawbacks of the power loom is that is can only weave one of a kind of designs and patterns.

DIFFERENCE BETWEEN HANDLOOM AND POWERLOOM

There is a huge difference between hand loom and power loom since even though both of the tools are used for weaving patterns, yet they function in separate manner. Here are a few distinctions:-

The handloom operates manually and needs a trained craftsman to operate it. It doesn’t run on electricity but on the power of manual labour. It uses mechanical energy in order for a fabric to get woven and come into its final form. Two peddle sets are present for the weaver to operate.

On the other hand, power loom uses electric energy to weave and requires one time operation. Once a power loom is started, it works on its own and you get the results.

It is obvious that there is a huge difference between the efficiency of a hand loom and a power loom. While the hand loom are manual driven, the power looms are driven by steam engine and are more effective and faster.

On the other hand, hand loom are made of wooden frame and needs special attention in order to weave different patterns. The materials and skills of the weaver decides the output so it is less effective and a bit of slow process.

One of the huge differences between a hand loom and power loom is that, since the work in hand loom is done manually so you can easily alter the designs and patterns as per your choice. This helps in creating magical and new weaving patterns that helps the craftsmen explore new styles and designs.

This is one of the major drawbacks that you face in power loom. In power loom, you can only create the replica of one particular design and cannot change it. Once the weaving design is set, it will take out the same pattern out and you cannot alter the design.

The features of both hand loom and power loom are different but also similar at the same time. Both of them use a small device called shuttle to insert yarn for weaving. As for warp threads it differs since you need to raise and lower the threads by manual shedding and that requires warp shed.

Power looms are modern looms and are expensive in nature in comparison to handloom. But one time investment leads to generation of the production at higher speed and in bulk.

Summary Of Handloom Vs Powerloom

Though both the hand loom and power loom are used for weaving, fundamentally they are poles apart in terms of operation and production. Both have their own pros and cons. While hand looms need skilled human hands, on the other hand power looms require electric power and liquidity since they are expensive to afford. But with the introduction of power looms, hand loom industry is dying out day by day.

How to recognize authentic handloom from power-loom?

Handloom is a dying skill, rapidly being replaced by Power-Loom. For power-loom produces fast and at cheaper rates. Power-loom productions are merely a six-yard of fabric, hardly personalized, all workers are just a part of the machinery, a mechanical system where repetition is the savior and uniqueness brings doom. As masses are drawn to the attraction of low rate, left with no choice, many weavers have unwittingly adopted power-loom but still, there are quite a handful of humans in the remote areas who refuse to give up their tradition and what they stand for. One such group of weavers are behind Chendamangalam handloom and those handmade handlooms, we are promoting online.

Struggling to make their ends meet and fighting for survival, to make a handwoven saree,  the whole family sweats it out, taking turns to weave so as to increase their output and earn more money. Not only is everybody collectively involved in the job work but also are equally responsible for the running of their family unit. Not only this, a weaver has his/her own creative inputs to offer in the making of a handwoven saree. And there’s no limit to his imagination either! It’s a team work. And finally, it also gives them an opportunity to interact directly with the buyer, giving them an exposure to a different world making them grow too. These weavers are small entrepreneurs in their own right and as such, they command and deserve dignity and respect.

Born creative, they inherit the skill from their forefathers. It runs in their genes. To be forced to comply with the changing face of society is not something they need. They want to stand upright with dignity, holding on to their identity. And so they refuse to give up their inheritance!

Fortunately, there are still patrons of handloom who value art and give weight age to the time, effort, creativity and skill that goes into the making of the textile they wish to drape for it connects them with its spirit and it ceases to be merely a piece of matter!

For those who wish to identify a genuine handloom, it becomes important to know how to differentiate a handloom from a power-loom and following are a few pointers –

1.         A handloom, by its very nature of being handwoven, is bound to have a rugged uneven surface giving it an ethnic appeal.  Knots, thread pulls, near the border are a commonality in handwoven sarees. Even if woven with the same yarns, a power-loom saree will be even in texture and flawless, lacking the allure of handlooms.

2.         Handloom sarees are woven by pinning the saris to the loom. They often have pin marks or holes on equal distance on top or bottom of saree or near borders, known as selvedge. In a power-loom this is not so, they are flawless and smooth. So to identify a handwoven saree, look at its Bevar or edges.

3.         Handloom sarees are soft in texture and more resilient whereas a power-loom saree will be stiff and hard in feel due to compact weaving and even spreading of the weft which happens in powerloom. To test the softness & its malleability, one must drape the saree and check its feel. Handloom sarees drape well.

4.         Handloom sarees often have extra threads left at the end of the pallu, which can be used for making tassels.

5.         The reverse side is a replica in a handloom whereas in a power-loom lot of loose threads or floats will be hanging on the reverse side, as it’s not possible to weave them in if woven on power-loom. So to test, one must turn over the saree and check the backside, especially the pallav as more work goes into the pallav design.

Handlooms have a certain advantage over power-looms too. And to know this is useful, as this throws light upon their design possibilities, durability and strength. So here are a few facts…

1.         Artisans work arduously to weave minute details. The level of intricacy and sharpness of design cannot be matched in a power loom saree. Authentic handlooms are decorated with intricate, traditional Persian patterns like Amru, Ambi and Domak. Machine-made weaves don’t usually use these traditional patterns or carry the level of detailing that handlooms do. Certain kinds of weaving techniques are only possible on the handloom. For instance,  the banarasikadhwa weave cannot be replicated on the power loom.

2.         Power-loom exerts a unique pressure which thins the fabric and thus a handloom saree with same raw material used, will weigh heavier & will have more body. When you hold a saree, you can feel the body strength.

3.         Due to loose weaving of handlooms, which also makes them more resilient as mentioned earlier, they breathe, allowing air to pass through whereas in power-looms you experience a feeling of blockage.

4.         Due to uneven weft weaving of handloom, they have better recovery from creases or wrinkles as compared with power-looms.

5.         Due to the thinness of the saree woven on power-loom, caused by speed resulting in abrasion,  the weaker fibre breaks and sometimes a group of short or broken fibers on the surface of the fabric become tangled together in a tiny ball and a pill is formed. This reduces the strength of the fabric whereas in a handloom saree this does not happen. In a handloom saree the knots are subdued and near the border, whereas in a power-loom it can happen anywhere and it protrudes out.

So when you drape a handwoven saree, remember, it is not just a six-yard of fabric that you drape, but you embody somebody’s thought process, somebody’s creative skill, somebody’s toil and hard work and moreover a family lives and tradition thrives empowering millions!